Among all the new experiences that I live since I’ve arrived in Japan, there is one that I’d rather have avoided and that I rather avoid in the future too, but I’m afraid that there is no escape from it in Japan. I’m talking about earthquakes.

I’ve never had experienced an earthquake before. Well, it’s not 100% true, there has been a couple where I grew up in the French South west but as they’re never above magnitude 2, I never felt them. I also never felt a single earthquake during my previous trips to Japan.

So the little event that happened on November 21st, 2011 was a first for me.

So, we were on November 21st, 2011, it was 7.20pm, we just had finished eating dinner. The family was watching TV, and I was preparing myself for my first day of work in Japan the following day.

Suddenly, an insert appeared on the TV screen and informed us of a Magnitude 5 earthquake in the northern part of Hiroshima Prefecture.

I didn’t think much about it, Magnitude 5 is indeed worth mentioning, but in Japan, where everything is built to sustain much stronger earthquakes, it’s not really a big deal.

However, I realized that everybody became silent in the room. I thought that they were just waiting for more news and that since March 11, people are more sensitive to that kind of news.

A few seconds later, I understood that my Japanese family was indeed waiting, but they didn’t wait for more news. They waited for the quake to reach us! It did about 30 seconds later. 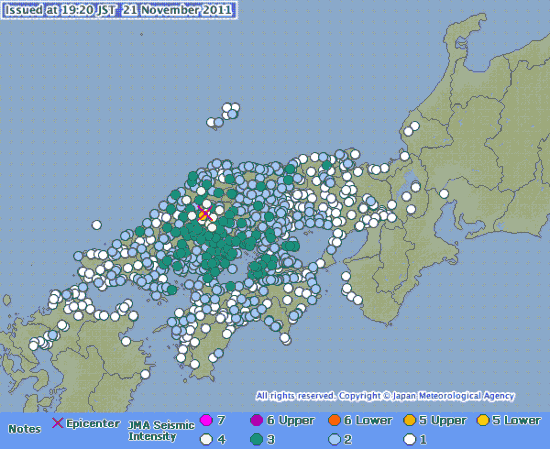 It started with some sort of faraway drum roll coming closer fats.

Then the house started to vibrate as if a huge train passed in the backyard or something similar.

Furniture, dishes and every object in the house shook making some noise

Nothing fell, nothing broke and the only reaction from my in-laws was “well, that was a short one.”

I feel that had I not been present at that moment, they would just have went on with their evening without a second thought.

For me, it was a pretty uncanny moment. A very strange feeling indeed. I was not exactly scared, but I had this strange sensation that something “unnatural” had happened. I knew what had happened and I knew it was nothing, but from that moment earthquakes have now become a real thing to me, not just something I hear about, like they always had been before that.

Now, let’s hope the next one is as far away as possible in the future and stays as small as that one was.

10 thoughts on “My First Earthquake!”