As you may already know, I took a few days of vacation last October (a luxury in Japan) and I spent some of this time on some of the islands in the area. Most of them are regularly featured on this blog, but I also visited a new one (as surprising as it may sound, there are still many islands that I’m not familiar with yet). I’m talking about Honjima. I’ll tell you and show you more about it in the coming weeks/months. Today, I want to tell you about a very interesting experience that I had on the island. I want to tell you about my first night in a minshuku.

If you don’t already know what a minshuku is, it’s basically a Japanese bed & breakfast (sort of). I assume that there are different kinds of minshuku, but this one was worth mentioning for a few reasons.

It is called Yakatabune and it is located in a building that is about 150 years old – but that has been renovated very recently. It is located in the village of that is known for its historical buildings dating from the same time (the end of Edo and the beginning of Meiji). I’ll show you pictures of Kasashima another day to focus on the minshuku itself today as it was a night to remember. 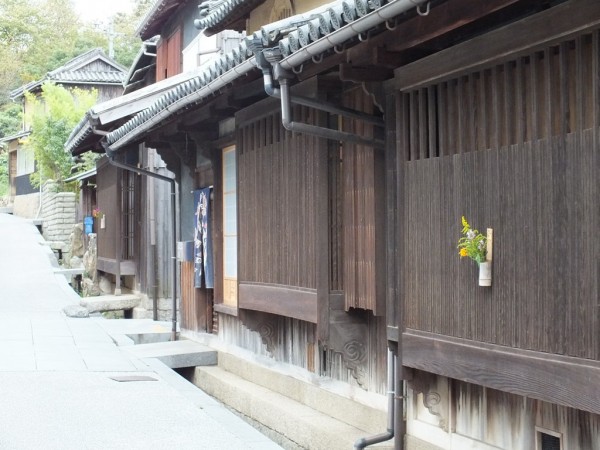 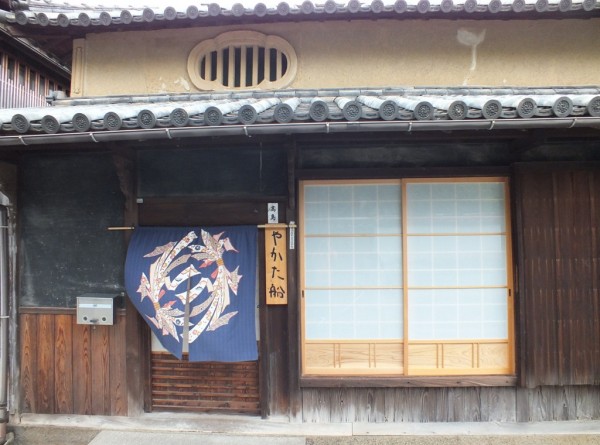 The house was rather large and divided between the private quarters of the owner and the rooms devoted to the guests – that was us. I think some minshuku can welcome several groups of guests but this one had only one main room even though there were two rooms for us – the other one being used to larger groups and/or families with older children I assume. So it is in a very intimate atmosphere that we spent the evening as there were only our hostess and us in the house.

The house, let’s talk about it.

Upon entering, we ended up in a usual Japanese entrance, where you leave your shoes behind and where you actually enter after having climbed a couple of steps. This entrance was actually rather large, almost a room in itself, and right after we were in some sort of tiny living room (right behind the window in the picture above): 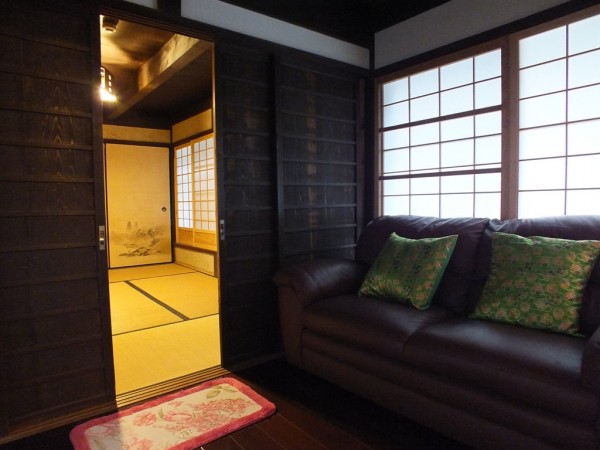 In the background, you can get a glimpse of the first room, that we didn’t really use (as previously mentioned it’s used for larger groups who don’t necessarily want to sleep in the same room).

For the rest of the visit, I’m going to do something I do too rarely on this blog, use a video. Sorry for the sound is only in French, I didn’t have time to shoot a second one in English and if I wait until I find the time to make subtitles I’ll never finish this post (I’m not saying anything that interesting in it, mostly paraphrasing what I’m showing):

For more details, here is a gallery of pictures of the room (as usual with galleries, just click on one of the pictures and then you can navigate back and forth with the arrow keys):

One detail that surprised me when we arrived at the minshuku was the fact that our hostess asked us at what time we wanted to have dinner even though it was still early in the afternoon. I hadn’t really thought about dinner yet and actually, I had no idea that dinner was entirely part of the minshuku experience (at least this one), even though a clue had been dropped a few days earlier when we called to make a reservation the owner couldn’t give us a positive answer right away, she first had to check with a fisherman friend of hers to see if he could bring fresh catches on that day.

I started to suspect that dinner wouldn’t be just an anecdote when our hostess took more than two hours to prepare it. 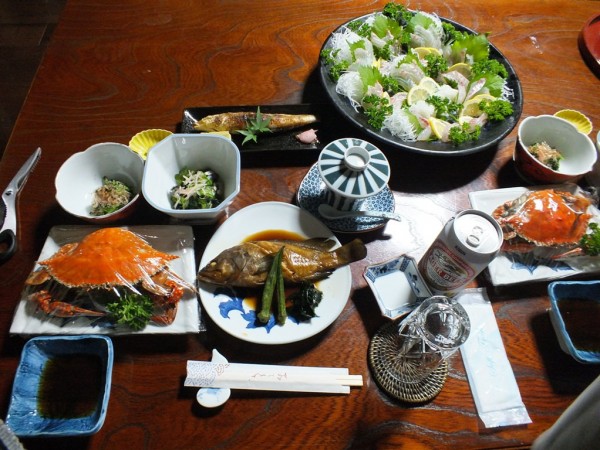 Once again, sorry for the lack of English in the video. I basically say that this is a meal for two, and 康代 not being a big eater, I’m about to be very full at the end (and indeed I was). 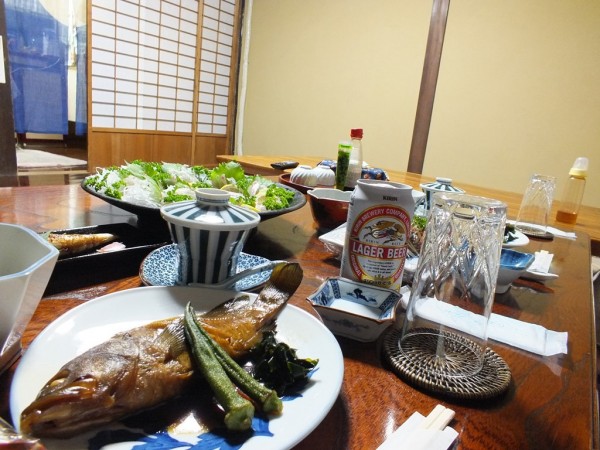 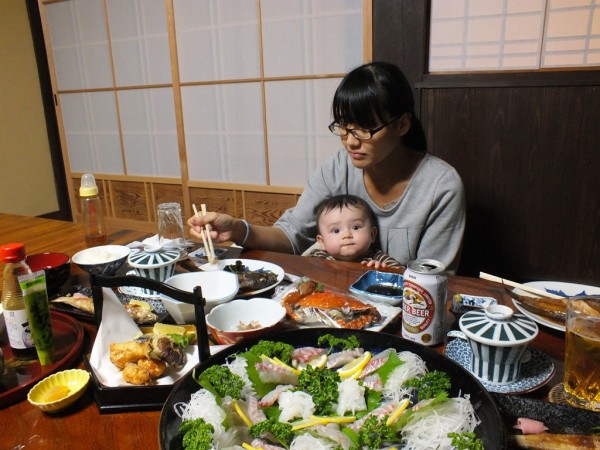 I don’t think I need to tell you whether it was good or not, do I?

And of course, almost all of it was grown or caught locally (on the island or around).

That was also my first time eating fugu! It’s the fried dish on the front left of the previous picture. I have to admit I was not too confident eating it. It ended up being quite an interesting fish. The taste was nothing too special, but the texture felt more like meat than fish.

After dinner, we returned to our bedroom where two futons had magically appeared while we were having dinner. After such a meal, sleep was not hard to find. I have to admit that I didn’t sleep very well (the futons were extremely thin), but it didn’t matter much, waking up in such a room will make you forget those types of inconveniences.

The following morning, after breakfast and before leaving, our hostess had one last surprise for us. Well, it was not a complete surprise as 康代 and her had talked about it on the previous evening.

She brought us to her field, just outside the village to dig up sweet potatoes! 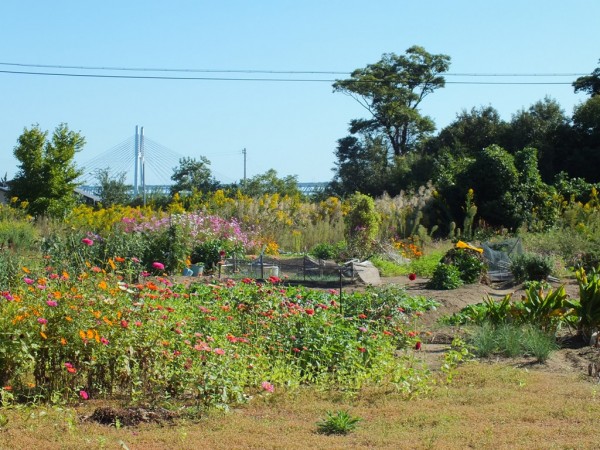 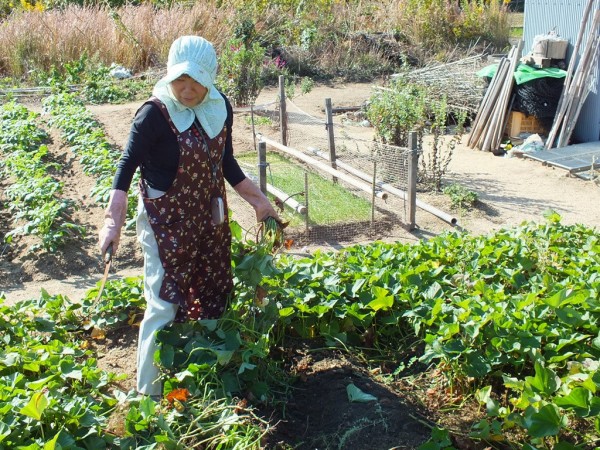 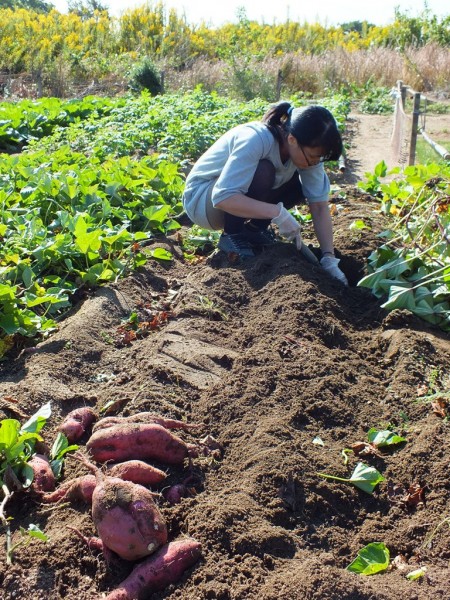 The surprise was that we were mistaken on her intentions. We thought that she had proposed us to help her dig some potatoes up because while talking with 康代 on the night before, she told her that she had never been in a field. So we thought our hostess wanted to give her the opportunity to experience this (personally, digging up potatoes, been there done that in my younger years and someone had to take care of 華 anyway).

But that was not exactly what she had in mind. Sure, she wanted 康代 to have her first agricultural experience, but she also wanted us to have the 12 kilograms or so of sweet potatoes that were found! Unfortunately, we couldn’t carry all of them, so we left about half to her. The rest was delicious (there may be one or two potato still left).

She also invited us back in November to plant onions with her, but as the whole family was more or less sick in the past couple of weeks, we had to decline. Another time hopefully.

When I tell you that the people from the Seto islands are among the nicest people I have met and the fact that Japanese people are not very friendly with strangers is another one of those unfounded clichés (unless it’s true in the Kanto region where most clichés about Japan usually come from?).

In any case, that was my first experience in a minshuku, and I think it will be harder to top it anytime soon.