Last Thursday, we went back to Naoshima for the first time since Fall 2010, and when the time came to return to Takamatsu, I had a sort of premonition inspired by memories from my last visit there. In other terms, in October 2010 when the Setouchi International Art Festival received far more visitors than expected there has been problems when too many people hoped to leave the island on the last ferry. Luckily, we always managed to get on that last boat, but it was not always the case for everybody.

And on Thursday, when I saw the affluence on the island – it was almost as crowded as during the Setouchi Festival, I even feel that some lines for the some Art House Project houses were longer – I thought that if we hoped to get on the last ferry to Takamatsu, we’d better get to Myanoura port early. We arrived at 4.15pm and the ferry was scheduled at 5pm. Sounds too early? You decide, but there were already about 80 people in front of us when we arrived. A few minutes before 5pm, those were more than 500 people waiting in line. The ferry can contain 450 and it was not empty when it arrived in the port as it came from Uno Port.

When I saw various people in charge of organization in the port walking fast, talking a lot with each other, and counting several times the number of people in the line, I knew that my rough estimate was not too far from what was happening. I didn’t worry, being close to the beginning of the line, I knew we’d get on the ferry. Except that we didn’t.

A few minutes before 5pm, the first 150 people were asked to leave the line and follow an official. At first I thought that for some reason we were just going to walk around the cars waiting to embark on the ferry, but we soon passed them and walked towards another pier. I was not worried, but a bit surprised.

I understood really quickly what was going on. We were being led to the pier where fast boats – not ferries – go. So yeah, we got the chance to embark on a speed boat instead of a ferry (for the ferry price, that is ¥500 instead of ¥1,200), that means a 25 minutes ride instead of a 50 minutes one.

However, as we were among the last ones to get on the first boat, we had to sit in the back, outside on the deck. I was actually sitting on the last row. It was a bit intense at times (I was not exactly completely dry when we arrived in Takamatsu) but it was worth it and a lot of fun.

I tried to take a few pictures, but not a lot, I didn’t want to sacrifice my camera for that. Yet, I shot a small film just to see what it’d look like.

If you’re not a Naoshima’s and Seto’s specialist, here are the things that you can see (or vaguely spot) in the order in which they appear:

And a few pictures showing the same things :

The proof that it was a very dangerous endeavor for my camera. 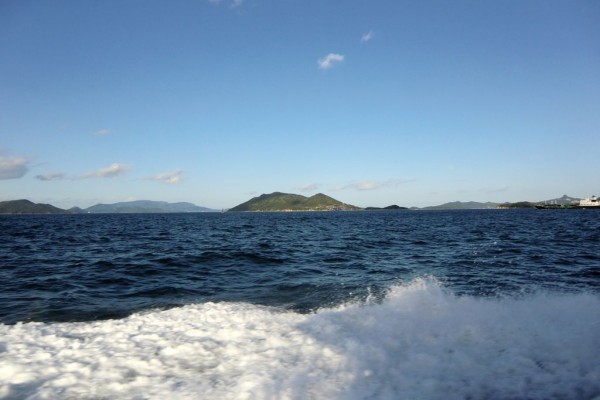