So, as I mentioned in the previous post, Ibukijima welcomes the Setouchi Triennale for the first time this summer.

I meant to write a long informative and practical post about visiting the island, like I did with Ogijima and Shamijima, but that won’t happen for a few reasons. Things didn’t exactly happened as planned, and even if we prepared ourselves against it, the heat was so intense the day we went to the island that we just saw the various artworks and left (we didn’t even see all of them). We didn’t really visit the island, we didn’t collect any information about it (as I don’t know it too well, it was only my second trip there). Actually, we didn’t even appreciate the art as much as we would have liked because of the heat. Yes, it was that brutal (I think about 35°C in the shade… with little to no shade…)

I hope to tell you more about the island itself another day (I think I never posted about my trip there last year, it’s a shame as it’s a pretty unique island).

As far as the artworks are concerned, they are there until September 1st and I have or will tell you about the following ones:

Unfortunately, I don’t really have anything to say about LUNA..CLIP..’s Step (I was partly disappointed by it, partly just too hot to think straight at that point – I even forgot to take pictures) and I unfortunately didn’t see Island Planning Lab, Ibuki by MIKAN+Shohei Oka+Sogabe Lab. Kanagawa University. And if I ran into EAT ＆ ART TARO for the second time (the first time was on Shamijima) I still haven’t tried his soup (this time a Ibukijima style recipe) as it’s always sold out when I get there. I think he simply doesn’t make enough of them. I’ll try for a third and last time on Honjima this Fall, but I’m afraid that it will be the same. 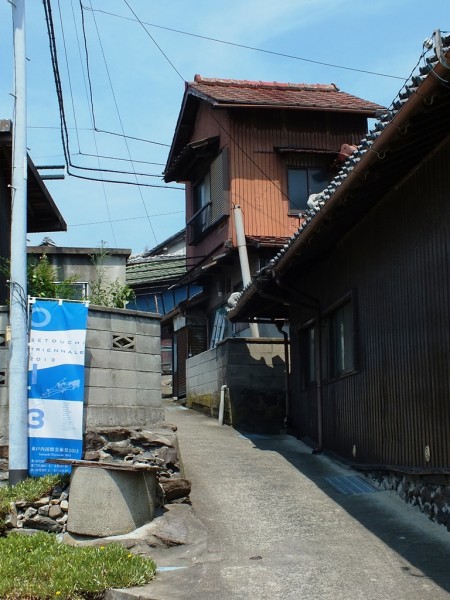 So, I can really give you only one advice if you intend to visit Ibukijima during the Setouchi Triennale: it’s going to be scorching hot! Dress accordingly, protect yourself from the sun, drink a lot, wear a hat, don’t forget your towel, and it may not be the best idea to bring a toddler.

In any case, I hope I’ll get to visit this island again, when the weather is more bearable, but I’m afraid that it will be months after the art has left the island.