The Great Bridge of Seto

On the morning of May 21st 2009, 康代’s father had decided to show me around. The original plan was to drive us to Kotohira so that we can visit Konpirasan and then return by train, but he ended up driving us around all of the western part of Kagawa.

We went to Sakaide, Marugame, Kan’onji, Zentsuji and finally Kotohira.
Cramming as many things as possible in one day is not my usual way of travelling, but who was I to complain? My soon-to-be father in law ditched his original plans for the day in order to show me all of those wonderful places from his native area. How could I not be immensely grateful?
It was also the occasion to get to know each other a little more, although it was in an unusual fashion as 康代 had to be our interpreter.

For once (and that applies to the next few posts) I won’t give you many details about the different locations (this will be for another time) just pictures and brief descriptions (after all the posts about the previous days were lengthy enough).

The Great Bridge of Seto

At first, I wondered why 康代’s dad really wanted to show me the Great Bridge of Seto (瀬戸大橋 – Seto Ōhashi). I know it is important in the history of Shikoku as it allowed the island to be accessible by land for the first time and as such being less cut from the rest of Japan (cars could already access the island by ferry, but trains obviously couldn’t). Yet, I was not exactly sure why the detour to Sakaide to go see it.

I assumed that he meant to show me of the aspects of Japan’s technical grandeur. It must have been a thing of importance for a man who grew up in a country in ruins, a country that became the second economy of the world and possibly the first technological one by the sheer efforts of its people. That bridge is also a symbol of that fact. However, despite the fact that I greatly respect that, for me, a bridge was just a bridge.
Well, that was until I saw the Great Bridge of Seto.

Sure, it’s “just a bridge”, but it has to be one of the most impressive bridges in the world and it definitely is quite a view. No picture can translate the feeling one gets when standing at the foot of such a massive construction. So obviously, I’m still going to try to show you with a picture: 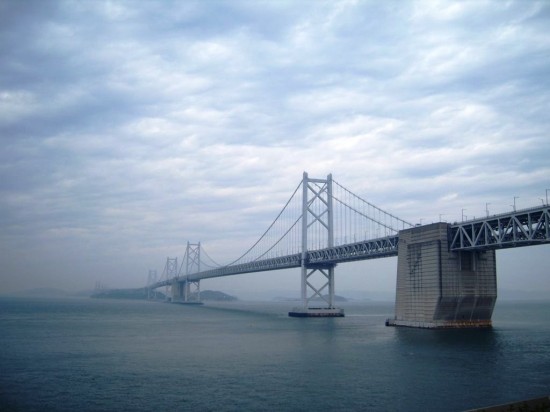 On a side note, sometimes, when I look at the map of the area, I wonder if having the bridge going through Megijima, Ogijima, Teshima and Ishima was ever an option. On the other hand, while I totally understand and recognize the need for this bridge, it must have greatly damaged the islands it does go through.

2 thoughts on “The Great Bridge of Seto”