For a couple of days, on Reddit, on French blogs, I started to see that question popping up more and more.

Here is my take on it.

(Disclaimer: since I started this blog I decided to make it as consensual as possible for a bunch of reasons – the main one being that even if this blog is personal, I want it to be about Japan before being about me. Well, I’m throwing it all out of the window for this post. I hope I won’t offend anyone, if I do, tough shit!)

(Second disclaimer: This post is much longer than expected, try to stay with me to the end, if you really can’t, the middle part is the more important one)

What is happening to Japan right now? What about to the rest of the world?

I am a bit baffled (and this is an understatement) by the nuclear panic that is taking over the whole western world right now. Where does that come from? Is that a sequel from the Cold War? What triggers totally irrational fears, nonsensical panic as soon as the words “nuclear” and “radiation” have been pronounced?

Well, my first advice on the topic would be to read and listen what nuclear scientists have to say about it rather than fearmongering western media.

Seriously, do it. I don’t have the time nor the skill for a lesson in nuclear physics right now, but if google it, it shouldn’t be too hard to find (a posted a few links on my Facebook page those past couple of days).

Chernobyl comes to a lot of people’s minds. Well, as a Western European living in Western Europe in 1986, I can tell you that I’ve been “contaminated” by the nuclear cloud, just like pretty much the whole population of Europe. Are we all dead? Is Europe a nuclear wasteland now?

Sure, a bunch of people in the vicinity of the power plant were badly affected and died soon after. Yes, in the vicinity, because they were submitted to massive radiations and not evacuated before it was too late and well. Don’t forget that it took place in the Soviet Union, land of lies, corruption and disinformation.

What about the rest of Europe where the nuclear cloud traveled all over for a few days, maybe weeks? Well, there never was any conclusive evidence that anybody was affected. It most likely caused a few cancers here and there, but we’ll never know how many exactly. What is known is that there was no spike in cancers during the following years.

Now let me be clear. Radioactive particles were found here and there, but we cannot tell that they caused any serious problem.

This is the thing, people hear words like “radioactive” and they freak out without really understanding what it means.

Radioactivity can kill, of course it can. But the keyword here is “can”. You, me, the whole world receive certain amounts of radioactivity everyday, does it kill us? No it doesn’t.

Radioactivity can kill you (or make you really sick) but it won’t necessarily do it. So please, stop freaking out about it. Respond to this word with using your brain, not raw uncontrolled emotions, please, it will be better for everybody.

Back to Japan and the Fukushima Daiichi plant. Things are bad there, very bad. Apparently they’re getting worse as I type these lines. Yet, worst-case scenarios still won’t be as bad as Chernobyl, and even if it gets worse, the affected area won’t be larger than 30 miles. If you’re within that radius, yeah, things will be problematic for you, and you will most likely be affected by the radiations coming out of the plant. Luckily most people in that area have already been evacuated as soon as Friday night or Saturday morning.

Well, Tokyo is almost 150 miles away. You most likely heard that a spike in radioactivity has been recorded there. Yes it has. It went from almost nothing to pretty much what you’ll get from sun radiations when you’re on a plane or in the Himalaya. Check your dictionaries, it went to almost nothing to something in a short amount of time, it’s a “spike”. Another example of spike: it’s freezing and a few hours later it’s 70°F/20°C. It’s a spike in temperature. Was it dangerous? Were you scared?
If you take a plane this week you will most likely received more radiations than anybody in Tokyo will. And I’m not going to even mention if you need to have an X-ray done.

To go or not to go to Japan? 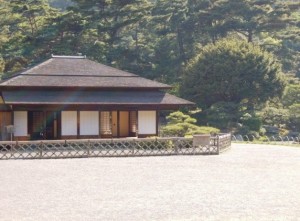 First a small reminder: about 90% of Japan is unaffected by the disaster. If you had plans to go to Japan, that still leaves you with a lot of possible destinations. You may even discover than Japan is not only “Tokyo plus two days in Kyoto” (how many Westerners are not aware of that fact yet?)

It may not be a bad idea to not stay too long in Tokyo though, not because of radiations, but because the city has to go at a slower pace right now, and the lesser people in it, the better. Actually you don’t even have to land in Narita or Haneda, there are many other international airports in Japan.
(quick trivia about me : I’ve been to Japan three times, I’ve never set foot neither in Narita nor Haneda, I don’t ever plan to)

Does the world care about Japan?

I’m going to tell you one of the first things 康代, my wife, told me on Friday, while we both realized how serious the situation was: “Does the rest of the world care about us? Are they going to help Japan?”

We all know that Japan has a somewhat peculiar relationship with the “rest of the world.” Yet, when a traumatic event occurs, fear of being left alone, abandoned, forgotten is the same everywhere.

I think now is the best time to show that you care – more than ever now that the media have stopped caring about the people of Japan anymore.  Those who consider themselves “Japan lovers” among you, there is no better way to show that love.

Remember, it is during trying times that you know who your real friends are.
Same thing goes here.

If you had plans to go to Japan, don’t cancel them! Don’t give up on the Japanese people now.

They need you. They need to see that the rest of the world hasn’t abandoned them. If you go there, they most likely won’t show you that they’re happy to see you there. They may not show it but they will be more grateful than you will think.

And from a much more down to earth point of view, Japan’s economy has been badly wounded. I don’t have a single doubt that Japan will recover from it and become stronger in the process, but that doesn’t mean you shouldn’t help. Tourism is not the worst of ways to pour money into a country.

So, please, do not let irrational fears control you. Show that you’re a sensible person. More important, show the Japanese people that you love them.

Don’t cancel your trip to Japan.

A few more words for those who want to help.

And if on the contrary you feel that you must go to Japan now, you must go to the devastated areas and “do something” I feel like I need to tell you “hold on a minute!”

Yes, I understand that helpless feeling, I understand that wish to go there and physically help. Guess what? I wish I could to. I feel extremely useless right now, I want to be able to help in other ways than just sending my money while blabbering on the Internet and sitting in front of my computer.

However, unless you have some very specific skills that are needed and missing (in that case, you should contact appropriate NGOs), imagine actually being there for a minute:

The only thing you can do right now is to donate, to the Red Cross, to Doctors without Borders and other credible NGOs (the ones that will really physically help people, not spread some sort of propaganda).

One last thing, a list of people to follow on Twitter (people that care about spreading and sharing real news, not stupid rumors, the scarier the better):

– Saturday, March 19th: Christopher Jones from “Accidentally a Blog” compiled all of the data from the radiations he has found.

– Sunday, March 27th: Viewpoint: We should stop running away from radiation by Wade Allison – University of Oxford.

-Tuesday, April 11th: What Will Happen to Japan? (an article about what is happening to the “unaffected” parts of Japan because of foreign tourists cancelling their trips)

20 thoughts on “Should I cancel my trip to Japan?”